Peace be with you

At the conference, we are about 25 participants, from Canada, the US, Australia, South Africa, the Netherlands, France, Sweden, Norway, Israel and Palestine, Germany, England and Scotland, from a widely varied church background – Lutherans, Anglicans, Roman-Catholics, Greek Orthodox, Salvation Army, Mennonite, Baptist and American, Canadian and Scottish Presbyterians. This also brings a variety of views on the conflict and the situation here, which leads to lively discussions at times.

We also visited Tent of Nations today; something I had been looking forward to very much, as I had heard Daoud Nassar, its Director, last year on his visit to the Church of Scotland. Daoud was born in Bethlehem; his family has owned their farmland since 1916. His grandfather

bought it, and – unusual for the region – registered the buy, not in his own, but in his son’s name, who was only five years old at the time. Many other Palestinians never registered the land they had bought, and subsequently lost the rights to it under the multiple occupations, not being able to prove their ownership. The name land is registered in also is very significant – in many areas in the West Bank the one person registered, in many cases very old men who are the head of their family, are the only ones granted access to work their land, their sons are not permitted to help them. Daoud’s father, who died in 1967, had hoped for the land to be a place for a peace project – a vision Daoud is working for. 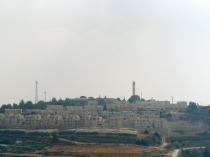 Today, the farmland is surrounded by five settlements, on all the hills above the land. Many of the settlers are already in their second or third generation there, so the towns have become their homes, which of course makes any questions to rights to the land much more complicated. The Israeli government has been attempting to get hold of Daoud’s land as well, by several means. The family of course have to prove their right to the land, which they are attempting to do in the military and subsequently the supreme court since 1991, a legal battle despite the fact that they have all necessary documentation, which has so far cost them in the region of $150,000. The family has also been put under physical pressure – being threatened by settlers with their guns, by having their watertanks damaged, by having 250 olive trees 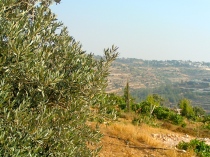 (which take a long time to bear fruit, and which are also a sign for peace) damaged. (However, these have been replaced by an English Jewish organisation, who wanted to show their support against the injustice.) The road to the farm has been blocked since 2001, on grounds of security reasons. When the Wall building is continued, it is likely that the farm, as well as 25,000 inhabitants of five nearby villages, will  be completely cut off from Bethlehem, and will be situated between the Green Line and the Wall, which will put them all in a very difficult, and very isolated position. The government has also offered to buy the land; their last offer was a blank cheque, for the family to ask for any amount they wanted, additionally to support in moving abroad, to a country of their choice. Daoud’s response to this was very clear: ‘The land is our mother, and our mother is not for sale.’ 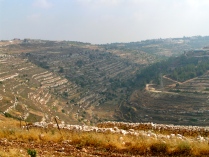 The farm has no running water, electricity or building permits, and has received several demolition orders even for the tents on its premises. International support helped in stopping the demolition orders however. The farm uses rain water, and has been able (through external support) to install solar panels in 2009, so that they have 24 hour provision of electricity. The aim is to also install two small wind turbines, to make the farm completely self-sufficient by the end of this year.

Tent of Nations indeed works as a peace project. Apart from Daoud’s journeys abroad, to tell about the situation, they run a tree-planting project between January and March, at which Israelis, Palestinians and Internationals come together to plant trees, to invest in a future. During the summer (incidentally starting tomorrow), they have a summer camp for local children, trying to plant seeds in them to work towards a peaceful future. In the villages, they offer a Women Project, offering IT, English and first aid courses, although the focus is less on education than on motivation and inspiration, which is much needed in an area where many are inclined to give in to the powerlessness their situation appears so show, not believing they can do anything.

Daoud’s, and Tent of Nation’s approach is admirable. Instead of responding to their situation with violence, with hopelessness, or by leaving, they want to be constructive, creative in bringing change. The motto of Tent of Nations is ‘We refuse to be enemies’. Instead, they emphasise the importance of meeting another as humans, not as opponents, getting to know each other as vulnerable, indeed human beings. History should not be used to block the future, instead it is important to find solutions for the suffering for all inhabitants of this country, now.

Daoud urged us to not choose a side, to not look for right and wrong here, but to side with justice, to work for justice and eventually for peace. Peace can only come once justice is achieved, but in the process, perhaps it is helpful to not look for the guilty party, but instead to see the suffering on either side, and to work towards bringing it to an end. Daoud is one of the most inspiring people I have ever met – his faith, endurance in the face of oppression, and hope for eventual peace are amazing, in every sense of the word.

As he said at the end of his talk, ‘our work will continue’.